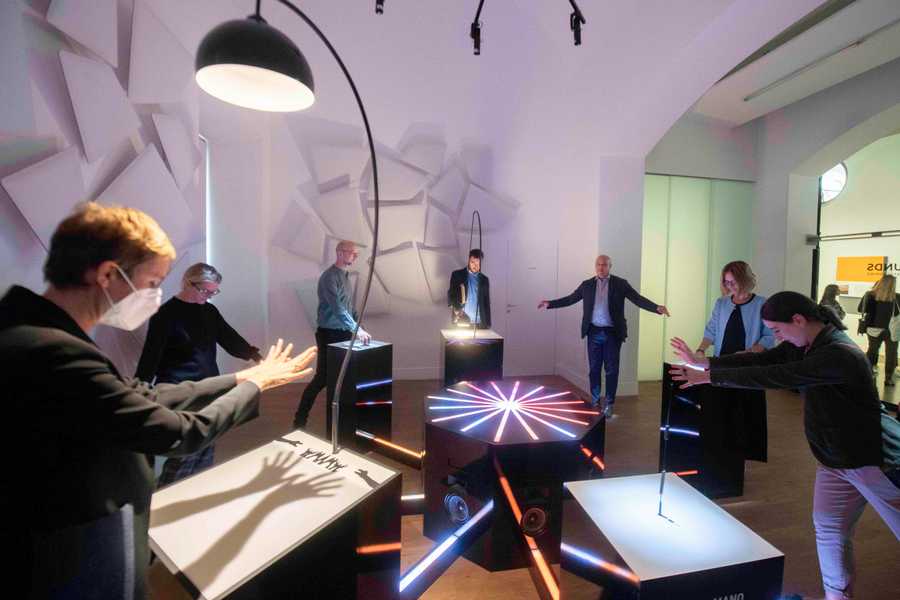 Hello from Milan where Cave of Sounds has just opened for a year-long at the Museum of Science and Technology. Eight digital instruments, each made by a different artist, are networked into a single interactive sound installation, which is then exhibited without performers for visitors to play.

I launched this project at Music Hackspace back in 2012 having been selected by Sound and Music as their first composer in residence. Ten years on, it’s toured three continents, which I find mindblowing.

This month, my newsletter is also a guest post on the Music Hackspace blog. You can join Tim Murray-Browne’s monthly newsletter here.

After four years on a PhD researching the essence of “interactive music” as an artform, my head was filled with theories of what music is. Most prevalent was Christopher Small's description of music as a playground to explore the possible social relationships between people, free from the consequences of literal reality. We shout, harmonise, clash, resonate, shout, sit quietly, dance, flirt, show off, lead, follow. The whole gamut of interpersonal dynamics is there.

Cave of Sounds was originally called Ensemble. The single word interchangeably describes a group of people, a set of instruments and the sound they make together. I imagined prelinguistic people sitting around a fire evolving music as the gateway to the dynamic web of relations and roles that makes human teamwork so formidable. From this perspective, ensemble is the fruit and the necessity of music. It is the practice of individuals becoming a single force of consciousness.

I observed that in the music hacker scene, a single individual is often instrument-creator, composer and performer. I’d see people perform together on a stage. But in this space, creating and hacking technology is a musical act in itself. So what happens if we create the instruments together? Like how we improvise together in a jam, except with the instrument-building bit. Would we end up with an ensemble to match the spectral balance of the orchestra? Would our individual musical identities still shine through in the outcome?

I put out the invitation to the community for people to join an experiment where we each build an instrument for a new ensemble. Eight got involved: Dom Aversano, Susanna Garcia, Wallace Hobbes, Daniel Lopez, Tadeo Sendon, Panagiotis Tigas, Kacper Ziemianin and myself. As we each set about building an instrument, we met every few weeks, sharing ideas, prototypes and skills. It took ten months. 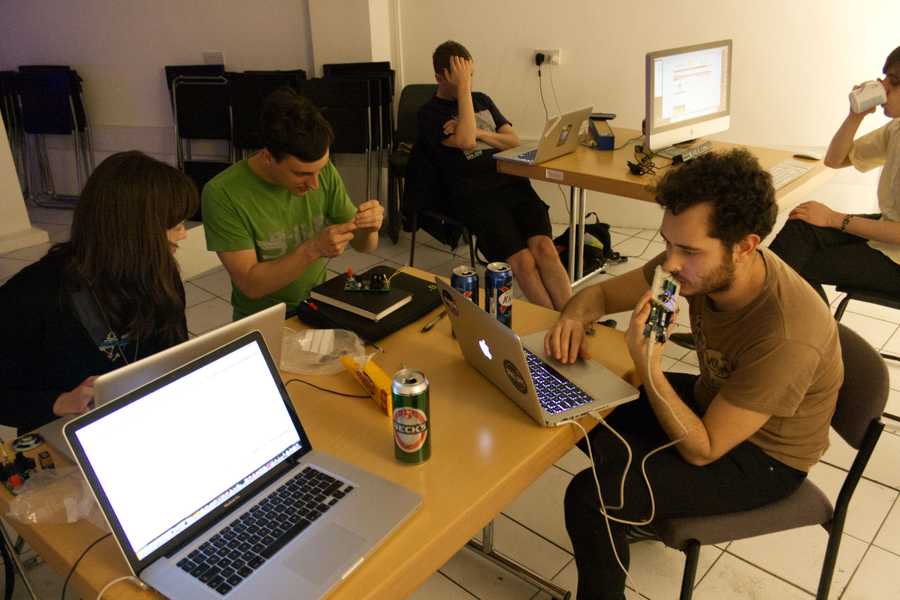 That initial vision of prehistoric people around the fire persisted, as did the egalitarian and grassroots ethos of the scene. The circular arrangement of the instruments was agreed because we wanted no hierarchy. At a hackday, Dom dropped presented the project as “a cave of sounds” and the name stuck.

I pushed to avoid any official performances Cave of Sounds. It’s exhibited for visitors to play. To introduce professional performers would subordinate the other players. It would set a standard. Without official performers, we avoid defining how these instruments should be played. What the audience does can remain as open as our experience of creating it was. This kind of ensemble is emergent. Bottom-up, not top-down.

I might have thought leading a bottom-up process would be a lightweight undertaking, but I remember finding it stressful. The more unpredictable the pieces, the more peculiar the task of keeping them together. It was stressful too. I remember helpful words from Atau Tanaka, one of my two mentors on the project: the work is the process so its success lies in remaining authentic to that process rather than its outcome.

The outcome turned out better than I could have imagined. Through serendipity, we were able to debut the finished work for one week in the downstairs lobby of the Barbican. The sound of the eight instruments ricocheted off the brutalist concrete pillars. 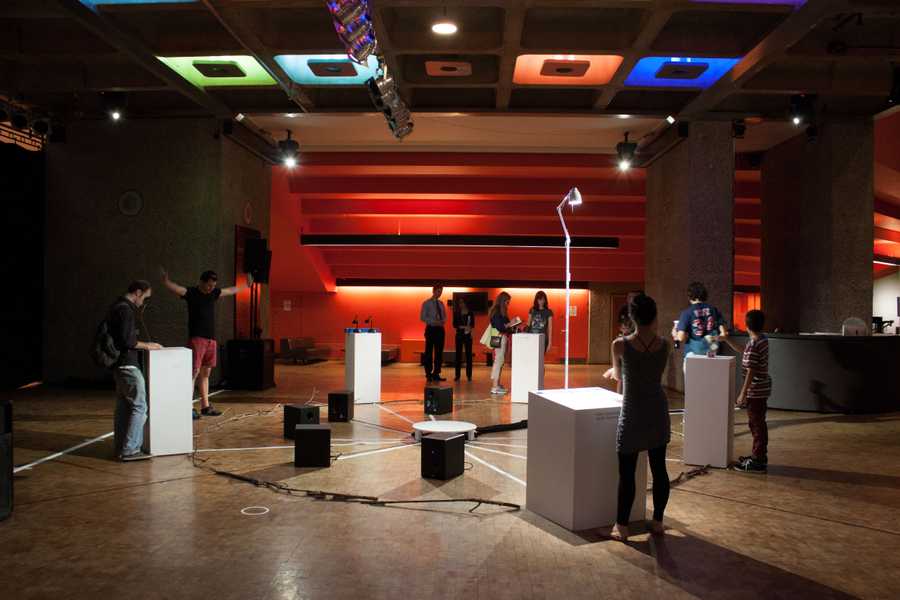 Kacper’s Lightefface is a lamp and an array of sensors each controlling a different harmonic of a fundamental. Panagiotis’s Sonicsphere is a hand-sized sphere that you shake and rotate to play and bend notes. Dom’s Campanology lets you move your arms to play percussive rhythms based on the algorithmic patterns of churchbell ringers. Tadeo’s Generative Net Sampler has invisible trigger zones that play sonifications of the internet’s background noise. Susanna’s Mini-Theremin modulates sampled audio as your hand gets closer. Wallace’s Joker is a conduction-based drum machine that relies on the player wearing a mask to function. Wind, my contribution, lets you play a flute by flapping your arms about.

The pièce de la résistance (in my opinion) is Daniel’s The Animal Kingdom, which uses custom computer vision code to analyse the shape of hand shadows people cast to play an array of animal and synth sounds.

When people play together, lines join them together in a central projection. If they continue for a little bit, the sounds evolve with the harmonies becoming more complex.

In its original form, Cave of Sounds required two of us to be continuously present to periodically fix, reset and recalibrate the instruments. But more challenging – from a touring perspective – was that each instrument ran on its creator’s laptop. Few in our world are able to give up their laptop for a week or two.

In 2017, I received funding from Arts Council England to build a team to re-engineer the work into a tourable format. Further support came down the line from British Council in Athens, the Museum of Discovery in Adelaide and now the Museum of Science and Technology in Milan. 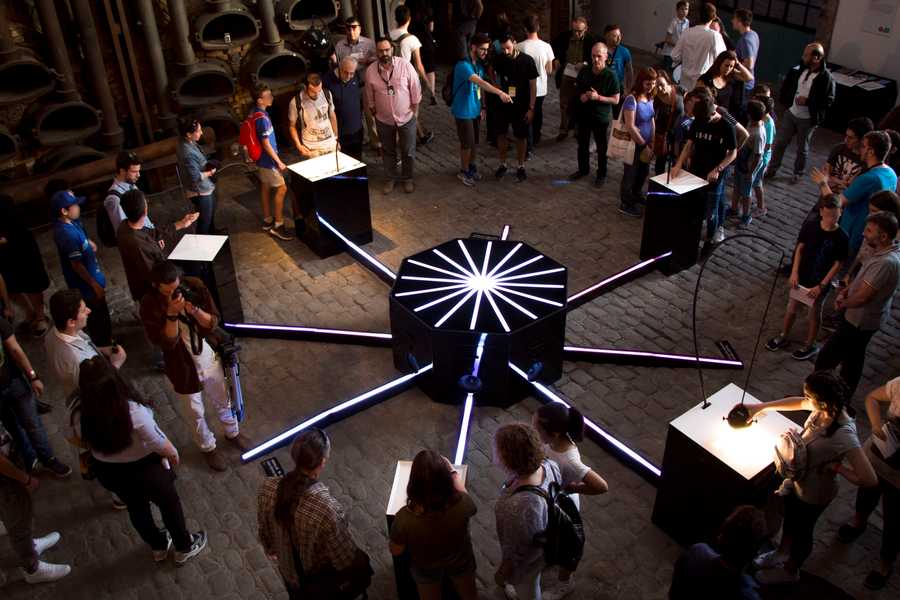 The most striking difference in this new version is the visual form: an octagonal centre with plinths and dancing LED lighting stretching out, designed by Sets Appeal. But internally, everything has been reengineered. Code rewritten, Max for Live patches converted into a standalone C++ programs, all audio rendered through a single MOTU soundcard, PCs scheduled to reboot each night and a single switch for gallery staff to turn it on and off.

The writer John Higgs observes our tendancy when reflecting on the past to project neat narratives that disregard the raw chaos of what actually happened. The story above is the me of today finding the simplest path through it all. In 2012 we were strangers. Today the eight of us are still friends. We’re spread across three or four countries now but still catch up on zoom. Collaborations still happen between us. And so perhaps it is natural that the bond of musical collaboration is the most salient strand of the story for me.

Tim Murray-Browne continues to create digital interactive art. You can follow his work at timmb.com, or on Twitter, Instagram or Mastodon. Cave of Sounds is on show in Milan until September 2023. Check the Museo Nazionale della Scienza e della Tecnologia Leonardo da Vinci website for exact opening times. 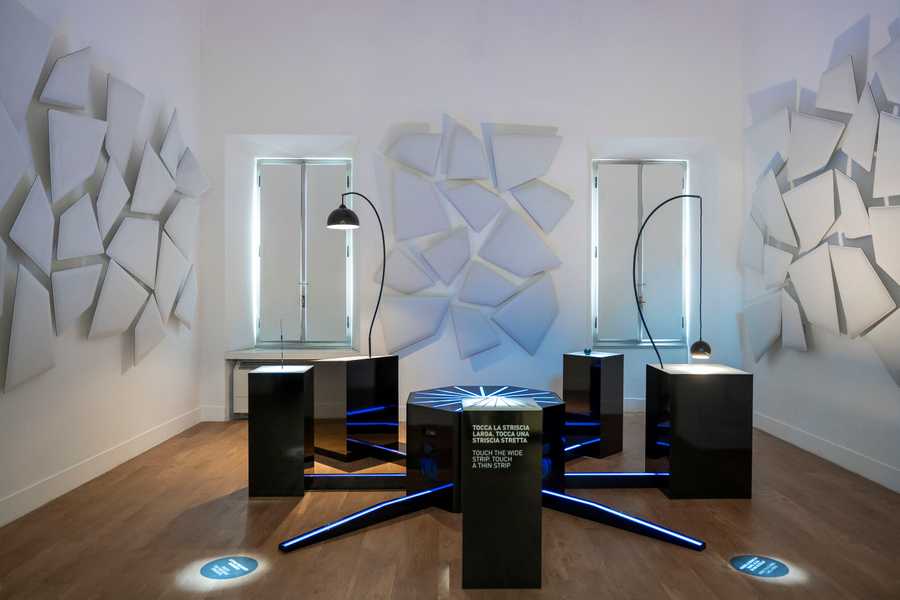