What seem'd corporal melted as breath into the wind

The earth hath bubbles, as the water has,
And these are of them. Whither are they vanish'd?

Into the air; and what seem'd corporal melted
As breath into the wind.

In What seem'd corporal melted as breath into the wind, each circle transforms an interconnected and continuously fluctuating field beneath. To me, it relates to the nature of perception, the helpful but imperfect boundaries we draw around what we see as we classify reality into a model in our mind.

For the past six months, I've kept an hour long morning practice of coding visuals. Most times I've listened to Jon Hopkins's album Music for Psychedelic Therapy from start to finish.

Coding generative visuals is the purest form of creative coding for me. I have the image on the left of my screen, code on the right. Each time I save the document, the image updates. Each pixel I can trace back to a few hundred lines of code. And yet, each tweak to the code is usually a hunch that may or may not lead to a surprising and beautiful result. I suppose in this way, it follows the same ‘variable reward’ pattern of addictive technology. Except instead of mindless email checking, it's mindful creative flow: hypnotic and exhilarating.

Here are some outputs along the way of the above artwork:

The practice is a reminder each morning of what creative flow feels like, a regrounding of unplanned action within my own aesthetic sensitivity. It makes me excited to start each day. Yet, throughout, I've not been entirely sure why I've chosen this as my morning practice.

As an artist, what I'm searching for can often be things that we don't yet have the shared concepts to articulate. John Higgs describes this as like being a fisherman in the collective unconscious. You have to let your feelings to guide you. But feelings can lead you astray, particularly once the enthusiasm that ignited a project runs out and it turns into a grind. It's tempting to let go of the fishing rod and throw out a new one.

Usually, you have to trust your heart to decide what endeavours to start, but trust your head to decide when to stop. Yet with these visuals, my heart is still leading while in my head I wonder how this all relates to the Big Picture. For me, that Big Picture is the question underpinning my artistic research: How does embodied interaction with technology shape the way we think? However, I think the point of convergence is starting to emerge.

Earlier this month, I was at Electromagnetic Field festival, which is a very special festival. My first with ethernet wired direct to your tent and a reprogrammable badge. I exhibited Latent Voyage, an ongoing prototype of an experience inviting visitors to use the whole body as a controller to navigate the high-dimensional topology of an image-generating AI. As you move, the image morphs with you. Each slight variation of your pose reveals further the unfamiliar, yet uncanny, imagery of the AI model. 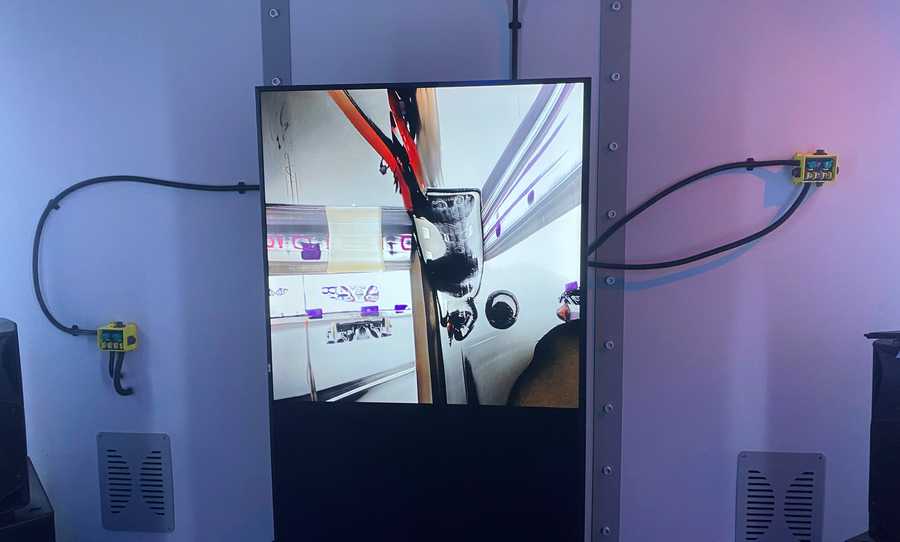 It's the prototype's third outing, and while the presentation is raw, the interaction is promising. I've seen many people lose themselves for extended periods, into a completely unfamiliar and invisible interface and with no instruction. With my mind infused from the morning practice, I'm seeing overlap between this experience and my own creative coding experience. That same confluence of creative intention with a looseness of control. And yet, the embodied state of mind Latent Voyage pulls you into is the opposite of the immersion into the webs of symbols that coding brings about. This is exciting for me.

At the festival, I also gave a talk: Rewilding Human-Computer Interaction. I argue that humans need wilder digital spaces to let us tap into our innate capacity for self-regulation and community building. The analogy with rewilding in nature is exciting for me. I'm writing an essay where I develop these ideas in more detail. I'll share this in the coming months.

A map is emerging for the next Big Project.

It will be an interactive installation.

In the meantime, I have a backlog of ideas to put into words. Writing helps clarify the ideas underpinning my work. In fact, when kicking off new projects, I often write extensively for proposals and funding applications. But then I rarely share that text. I think I tend to be too precious in my desire to preserve the openness of what a project may evolve into. The problem is that by the time I'm ready to share the work, I'm so deep down the rabbit hole that what I have to say makes little sense to anyone else. (One reason why it's so helpful to hire outside people to document a work.)

So for the second half of this year, I'm shifting my morning practice to writing – writing that will be shared.

For anyone in or near Rotterdam, I'll be there from 8-19 August. Let me know if you're around.

If you haven't seen Joel Coen's recent film of Macbeth, maybe this clip of Kathryn Hunter performing the three witches will persuade you otherwise.