interactive sound installation
Cave of Sounds is an interactive sound installation connecting music’s prehistoric origins with the technological radicalism of the music hacker scene. It is formed of eight newly designed musical instruments arranged in a circle around a luminescent hub. Visitors are invited to play the instruments freely without mediation or guidance.

Cave of Sounds emerged from an open ended process which I began in 2012 as composer in residence at Music Hackspace, London. I announced an open call to join an experimental collective of musicians who would each create an instrument encapsulating their individual identities and musical practice. We met regularly in a process akin to a ten month jam session for musical instrument designers. We showcased the first prototype of the work at the Barbican in 2013, seen in the video above.

Following several years of evolution and international touring, we received a grant from Arts Council England in 2017 to complete the project. This final form, shown below, was debuted at Athens Science Festival in 2018. The musicologist Small argues that any musical ritual, from an orchestral recital to an illegal rave, serves to celebrate or reinforce a particular model of how society is sociopolitically organised. In this light, Cave of Sounds challenges the specialisation of creative expression within contemporary society, and, for many, the relegation of artistic experience to passive consumption. It embodies the human capacity for social organisation that emerges organically and without hierarchy. Through collective action, empowered by accessible technology, the work is a flagbearer for the maker movement, grassroots activism and a vision that empowers individual agency in a post-industrial world.

The open call had no selection process. After the first meeting, eight of us chose to remain. We worked through an experimental process of group improvisation, akin to a jam session for instrument builders, stretched over months and years. Each of us created one instrument. We met regularly to share ideas, experiment, listen and discover what themes and ideas resonated. Without hierarchy or an authoritative vision, musical roles emerged organically as we found our niche within the ensemble. We were a tight group - all eight of us continued until the first public exhibition of the work 10 months later, and we're still friends today. 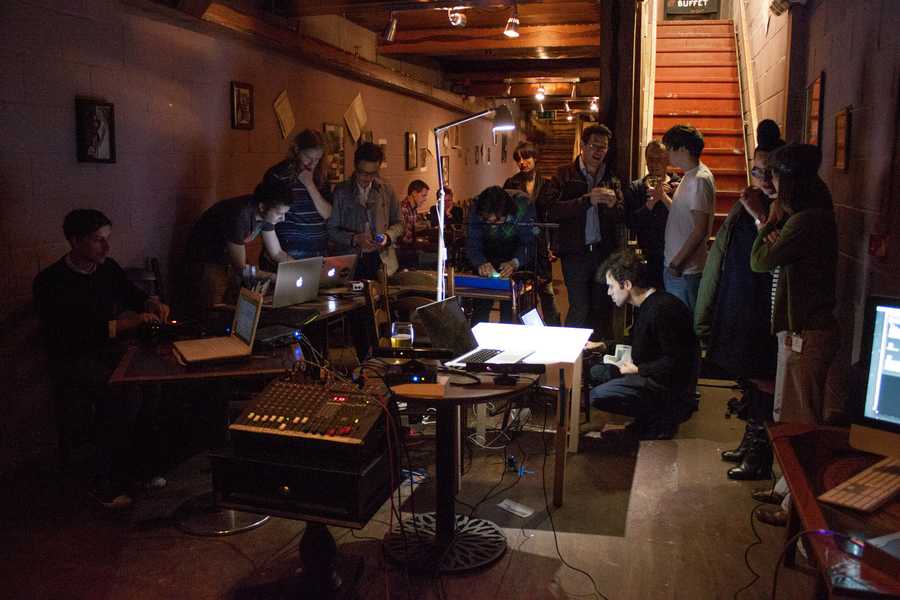 Over five years, the piece evolved in response to international audiences and spaces, creating an ongoing dialogue between audience, artists and environment. After completing the installation into its final format in 2018, the project was declared complete.

Cave of Sounds challenges the industrialised notion of music as a service from producer to consumer, inviting audiences to be active explorers within a musical ensemble. It is unusual in how it appeals evenly to young children, teenagers, adults and seniors. Part of this is due to each instrument combining playfulness with the depth and intentionality that invites further creative investigation. But there is something beyond this in the atmosphere of the work: engagement, energy and community.

Most recently at Athens Science Festival, I was talking to a volunteering scientist who kept returning to watch people interact with Cave of Sounds. She told me that in the chaos of the festival she found the space uniquely relaxing. There was no shortage of quiet spaces, but there is a different kind of calm created by the collective musical activity of Cave of Sounds. You are able to belong, to think, to feel the energy of others without any demands on yourself. 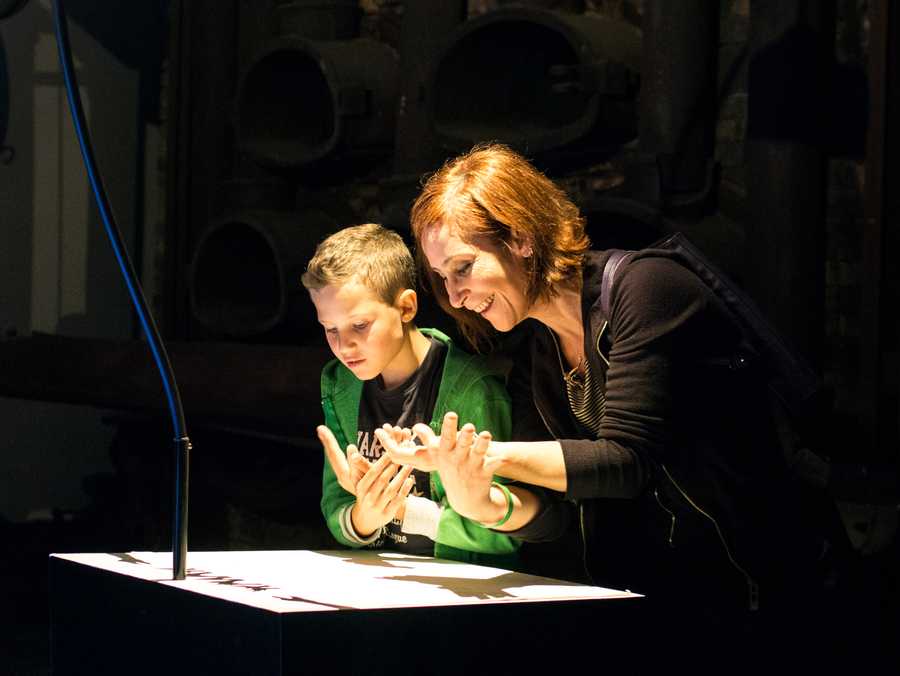 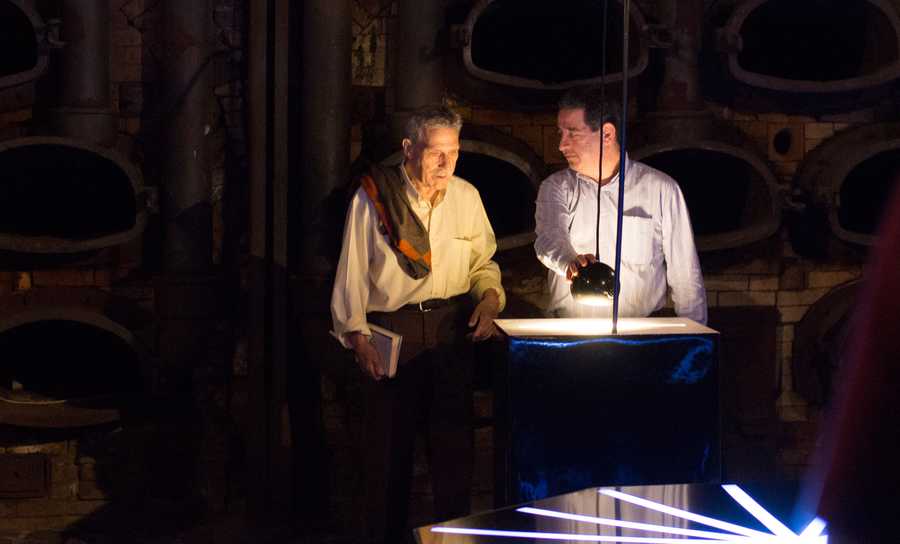 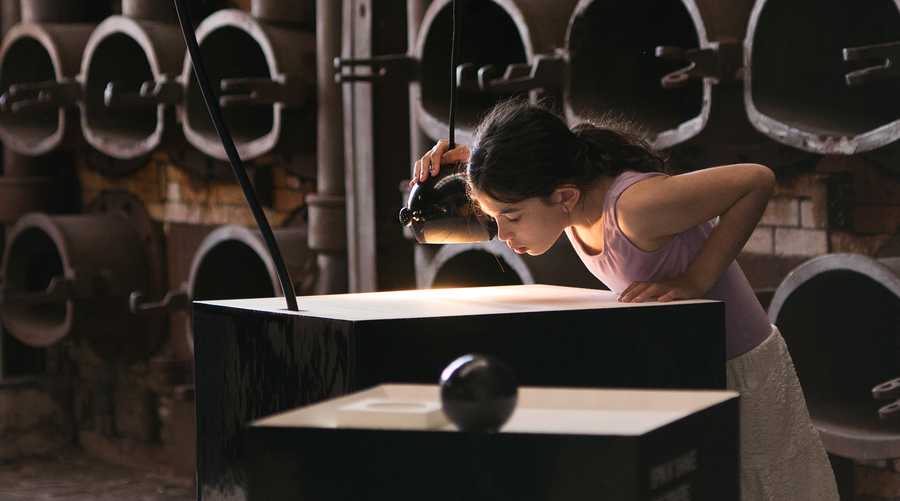 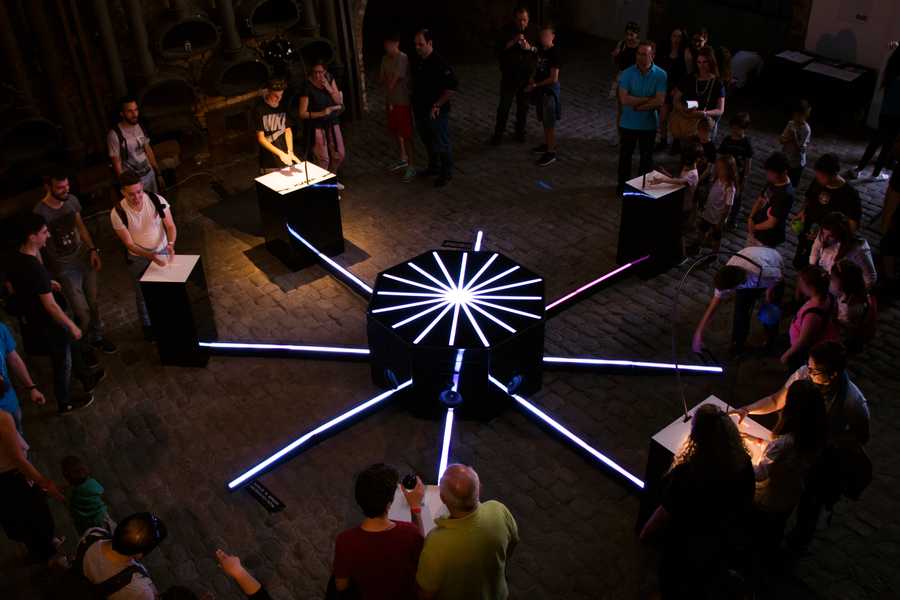 In 2017, the team was joined by Terry Tyldesley as Producer and Anastasia Alekseeva and Harry Murdoch as Production Assistants. The set for the completed was designed and built by Sets Appeal.

In 2020, a significant upgrade happened with help from Kevin Murray, James Gardner and Andrew Kirkby.

Cave of Sounds was created by Tim Murray-Browne with Dom Aversano, Sus Garcia, Wallace Hobbes, Daniel Lopez, Tadeo Sendón, Panagiotis Tigas and Kacper Ziemianin through Sound and Music's Embedded Composer in Residence programme working with the Music Hackspace. The Embedded programme is funded by Esmée Fairbairn and realised through support from the Arts Council England.

The residency was mentored by Duncan Chapman and Atau Tanaka. Special thanks for support to Hannah Bujic, Susanna Eastburn and Nick Sherrard from Sound and Music, Jean-Baptiste Thiebaut and Martin Klang from the Music Hackspace, Somerset House Studios, The Centre for Creative Collaboration, Troyganic and the Centre for Digital Music at Queen Mary University of London for providing creative working space, Mind The Film for producing the video of our work above, as well as Jenny Attwater and the many who provided insightful feedback on early prototypes of the work.