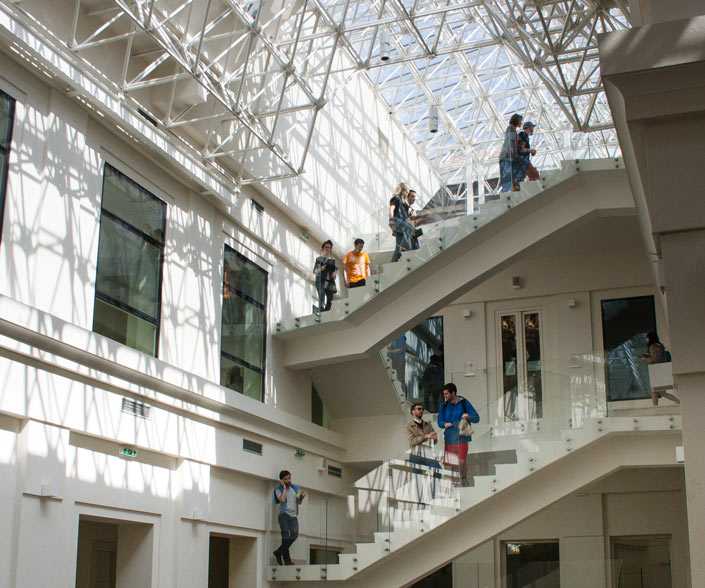 The past few days I've been in Belgrade for Resonate Festival. It's been a fantastic event pulling in a diverse group of individuals working in creative technology. I'm currently at the beginning of a new collaboration with dancer Jan Lee to create a dance work involving interactive sound and visuals, and much of my attention was grabbed by presentations and discussions in this area.

Here are some of the highlights for me.

On the first night Klaus Obermaier, Kyle McDonald and Daito Manabe gave a preview of a new project Transcranial that they are producing together. Klaus Obermaier has produced some stunning works of visually augmented dance performance, including Apparition from 2004 (an inspiration behind Daito Manabe's recent music video for Nosaj Thing). This was mixed with Kyle's work disrupting a sense of agency through substituting faces and augmenting movement within a video feed of your face, and Daito's work distorting actual faces by creating muscle twitches through electrical stimulation to the face.

The work in progress presentation of Transcranial included real-time video processing of dancer Milica Pisic. She was wearing black on her torso allowing her different limbs to be easily segmented on the video. The movements of her body were then extended in the video feed - at first subtly but growing more distorting as the performance progressed. This was an interesting example of the uncanny valley - the point where the distortions cross the boundary of physical plausibility is disturbing as we in the audience are forced to reassess our interpretation of what we're seeing. It will be interesting to see how this project develops.

Yuri Suzuki presented a prolific catalogue of his sound art projects. Topping it off was his music video of dancing robots for androp's World.World.Lights.

Sasha Gavrilova presented some of her projects with Sergey Titov in their Moscow-based partnership Stain. They have produced some nice projection mappings recently but my favourite work was Intersections - abstract shapes projected onto simple geometric forms without any 3D mapping, with some beautiful results.

Florian Jenett described his process as the combining of two forms with minimal intervention. This included Mixins, algorithmic combinations of vector clipart and Lookahead an inflatable radar dome created from bouncy castle offcuts. But I was particularly taken by The Architecture of True and False where now-defunct news portal websites were transformed into their black and white using javascript, printed and placed side-by-side to reveal structures reminiscent of derelict high-rises.

Joanie Lemercier, formally of AntiVJ, presented some of his beautiful algorithmically designed sculptures combining mirrors, projection and LEDs, including -Infinity and City Lights.

Also combining sculpture and projection to great effect were Elliot Woods of Kimchi and Chips. They have some impressive work on real-time 3D scanning using structured light which they use to projection map onto complex sculptures, such as their 2012 work Assembly and Lines Segments Space (2013) which they installed through the festival. Elliot's recent work builds on the idea that the ego of the media is demonstrated through the vernacular of its deterioration. In other words, the character of a medium is revealed primarily through its imperfections and disintegration, such as the rusting of iron or the familiar noise of a Kinect scan.

Jussi Ängeslevä presented a range of work from his students at the Berlin University of the Arts (UdK), each year on a different theme drawing on contemporary issues in everyday technology. My favourite was Extracts of Local Distance (2009) by Frederic Gmeiner, Torsten Posselt and Benjamin Maus. They analysed a large body of work from archictural photographer Klaus Frahm, extracting converging lines. From these they combined sets of photos while maintaining common lines of perspective, creating collages that are visually chaotic but retain a strong sense of space.

Daito Manabe followed by Aaron Koblin closed the festival. It was interesting to see the range of work Daito's studio Rhizomatiks produces. As well as the slightly disturbing work on electrical face stimulation, they work a lot with the Japanese girl group Perfume to create some impressive performance tech combining 3D scanning Pepper's Ghost-based stage holograms. I didn't catch the exact details of the tech here. Aaron's work was also impressive, exploring new forms of widespread collaboration such as This Exquisite Forest, a set of animations started by an artist and freely evolved through online users.

The final party was topped by an audiovisual performance of Cyclotone from Paul Prudence, someone who's work I think excels at combining visuals and music without one seeming to dominate the other. Unfortunately I didn't manage to see his talk at Resonate as it clashed with the Choreographic Forum, but based on a brief conversation with him in London a few weeks ago, and others who did see the talk, his process involves iterations of sketching visual ideas based on sounds, and designing sounds based on visuals.

All in all, a lot of amazing stuff, humbling but most definitely inspiring. Time to get cracking.